Enjoy three nights of Country Music! July 11-13, 2023
BANDS YET TO BE ANNOUNCED! ALL SHOWS ARE FREE!
Please check back here or follow us on Facebook at Facebook.com/HamptonNHBeach.

Award-winning duo Maddie & Tae are drawing praise for their No. 1 debuting The Way It Feels album release with Rolling Stone saying the new music is “anchored around their stellar vocal pairings and some of the tightest harmonies on Music Row.” Together as longtime friends and music collaborators, Maddie Font and Taylor Kerr co-wrote 14 of the album’s 15 tracks including the Platinum-certified No. 1 country radio hit, “Die From A Broken Heart,” which Esquire calls “their finest moment yet.” The pair also co-wrote two brand new holiday songs to join a collection of classics for their first ever holiday project – We Need Christmas. 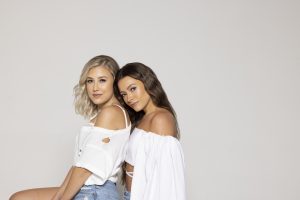 Maddie & Tae first broke out in 2013 with their brilliant counter to bro-country, the Platinum-selling smash, “Girl In A Country Song,” which took Country radio by storm, skyrocketing to the top of the charts and quickly going PLATINUM. The duo became only the third female duo in 70 years to top the Country Airplay charts, also earning trophies from the Country Music Academy and Radio Disney Music Awards along with multiple ACM, CMA and CMT Award nominations. Maddie & Tae have received widespread praise from Associated Press, Billboard, Entertainment Weekly, NPR, The Tennessean, The Washington Post, Glamour and others. The celebrated duo has toured with country music’s hottest stars including Carrie Underwood, Dierks Bentley, Brad Paisley and more. For additional information, visit www.maddieandtae.com.

About Isaiah Bennett
Former American Idol contestant Isaiah Bennett is an Acoustic/Folk artist based out of Portland, Maine. After leaving southern Maine at the young age of 18, Bennett lived in Boise, Idaho and Northern California, where he began playing acoustic covers of popular songs in wine bars and pubs. It was during those years that Bennett pulled from his background in Christian music to add soulful interpretations to his cover music while beginning to pen songs of his own. His first EP “HORIZONS” was released in 2014 and features six original songs written and produced by Bennett. “VESSELS” was released in 2016 and made it to #9 on the iTunes Gospel & Praise charts.

Bennett now resides in Southern Maine with his wife and two children. He continues to travel the area opening for bands, playing weddings, private parties and in local musical hot-spots. His live shows consist mainly of his own songs and popular cover songs, but always with a twist.

About 12/OC
12/OC is made up of 3 brothers and a drummer from Portland, Maine.  The band was born in the family kitchen

when the boys were all under 10 years old.  Music was always a part of their household and playing guitar and various instruments was a daily way of life for all of them.  Once Reid was discovered as the lead singer, the band found its groove and open mic nights became the foundation of their beginning.

Performing as a trio of three brothers, they began playing live shows across Maine from parks and rec gazebos to coffee shops and everything in between, and have now had the opportunity to open for Nashville acts like Love and Theft and Joe Nichols.  As their popularity has grown so has their versatility, adding a family friend as the drummer, their mix of music has helped increase their popularity across New England, making them one of the fastest growing bands around. 12/OC will perform on the Seashell Stage on July 6 at 7 p.m. 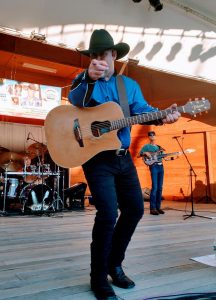 Kevin says, “Garth! What more do you have to say? I have been a fan of Garth Brooks since the first time I saw him perform at the Grand Ole Opry in Nashville back in 1992. Since that fateful day I have been performing my Garth LIVE! show all over the Country.” If you love the storm that was Garth Brooks in the 90’s, you won’t want to miss his show. Kevin will be opening Country Music Fest on Tuesday, July 5 at 7 p.m. with Line Dance lessons from 5-6 p.m.